Atheist Voters are the sleeping electoral giant, but will they wake up?

As we get ready to head to the polls on Tuesday, let's remind ourselves of the potential power of our community and reaffirm our commitment to participating in our democracy. If atheists and the non-religious would just get out and vote, we would have enormous power in our government.

This is an issue that we have been talking about for two years now.

With the continued growth of the atheist and non-religious demographic in our nation, politicians should be beating a trail to our door. And yet they continue to ignore us or outline malign us as bad leaders, unfit for public service, or unpatriotic. Rather than think about how to court us, they try to convert us.

To put into perspective just how myopic the continued reliance on religious voters is, let's look at some numbers.

In 2012, Pew reported that atheists and the so-called "Nones" represented 19% of American adults. A followup survey showed that we represented just 12% of that year's electorate. In other words, out of the estimated 41.6 million eligible non-religious voters, only 15 million or so showed up on election day. If we had turned out at the same rate as the country as a whole (about 58%), we would have expected to see nearly 24 million non-religious voters. Instead, we under-performed by nearly 9 million.

President Obama's margin of victory in 2012? About 5 million votes.

That's right. The atheists and non-religious folks left nearly twice the 2012 election's margin of victory on the table.

If we are to be taken seriously as a political force in this country, a force that politicians have to listen to on church/state separation issues, religious equality, and reality-based policy making, we must do better.

Since 2012, the non-religious demographic has grown by millions. Instead of just 19% of the American population, we now represent fully one quarter of U.S. adults. In 2000, we were just 14% of the population, according to PRRI.

Despite the growth of our community, our share of the voting pool in each election has been stuck at 12% since 2008. 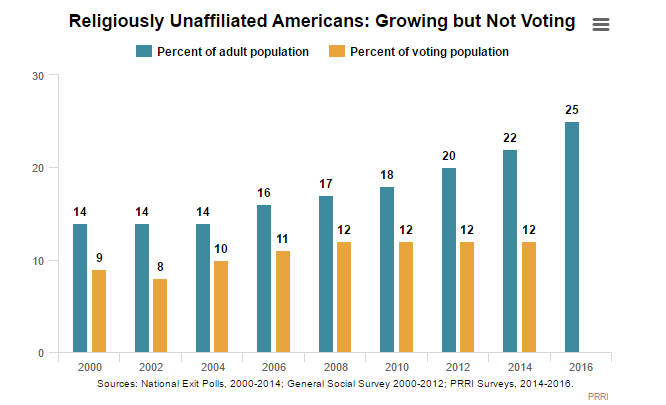 If that trend continues this year, we risk missing out on 16.5 million votes. That is a stunning abdication of responsibility on the part of non-religious voters.

We must work with local atheist communities to ensure that our friends are registered to vote and that they get to the voting booth on November 8.

If we can get our community to vote anywhere near the rate of the rest of the country, we can fundamentally change the electoral map and finally be viewed by politicians as a force to be reckoned with in the political process.

But if we continue to leave millions of votes uncast, we have to ask ourselves why candidates should even consider reaching out to us when the Evangelicals, while a shrinking percentage of the total U.S. population, actually show up to the polls.