President-elect Donald Trump's nominee for Attorney General, Jeff Sessions, has a troubling record with respect to his understanding of the Establishment Clause, the separation of religion from government in general, and his support for religious groups engaging in politicking from the pulpit in violation of federal law. Even more troubling, it now appears that the Senate Judiciary Committee is moving forward with hearings to confirm Sessions without having him complete the standard disclosures and questionnaires required of nominees. 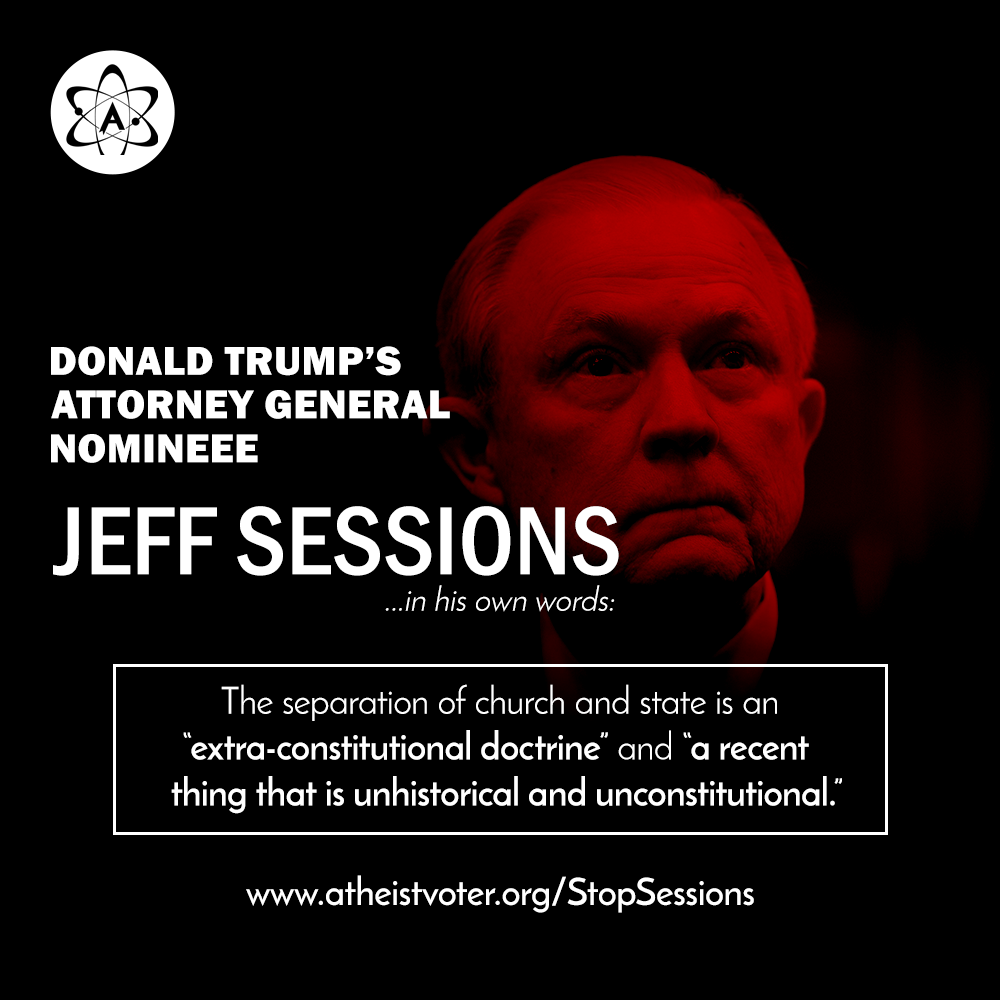 Senator Sessions' record on the First Amendment is very troubling for atheists and defenders of true religious freedom.

Sessions has publicly supported the placement of religious monuments on public land, railed against the "secularization" of the world, and even once asked the Department of Justice, which he is nominated to lead, to investigate a church/state separation group for "voter intimidation" after they sent letters reminding churches about their obligation to not engage in politicking during election season.

For all of these reasons, American Atheists will oppose the nomination of Senator Sessions to serve as the Attorney General of the United States.

In addition to the substantive objections we have to Senator Sessions' nomination, his responses to the Judiciary Committee's nomination questionnaire are incomplete. Even after submitting a supplemental questionnaire, Sessions' record and views on a variety of issues facing the Justice Department, including on matters of religious freedom, are still lacking.

We are asking you to call the Senate Judiciary Committee members at 877-959-6082 to voice your opposition to Senator Sessions' nomination using the language below:

I would like Senator ____________ to oppose the nomination of Jeff Sessions for Attorney General, or, at the very least to delay the hearing until Mr. Sessions has submitted his full record for review.

His record on the separation of religion and government and the First Amendment are very troubling to me and Senators voting for his confirmation, and the American people, deserve to know where he stands on the issues.

Sessions' Record on the Issues

Senator Sessions has a long track record of injecting religion into his policymaking, including on LGBT issues, women's reproductive health, and government endorsement of religion.

Sessions has consistently supported the placement of religious monuments to the Ten Commandments being placed on government property, including government offices and courthouses. Sessions has said that it is time to end "government hostility" toward the display of the Commandments. "It defies common sense to prohibit the display of such an important part of the nation's history,'' Sessions said. "The irrationality of the prohibition is highlighted by the fact that the U.S. Supreme Court, the highest authority on our Constitution, displays at least three representations of the Ten Commandments.''

In 1997, Sessions introduced a resolution supporting the display of the Ten Commandments by Judge Roy Moore. During remarks on the Senate floor, Sessions said, in part, "The Founders devised a Constitution that depended on religion serving as a civilizing force in societal life."

When Sessions was running for Senate in 1996, he said his opponent was "no friend to Christianity because he called for religious tolerance and supports a moment of silence rather than school-led prayer." Sessions' campaign chairman told reporters that Sessions "is for prayer in schools . . . and any other place where our young people are."

After the 2002 Ninth Circuit ruling that "Under God" was an endorsement of religion in the Pledge of Allegiance and therefore unconstitutional, Sessions favorably quoted an anecdote saying, "We do need a litmus test for judges. We don't need anybody on the Supreme Court who does not believe in prayer at football games."

Sessions has repeatedly said that government is "too hostile" to public expressions of religion.

He has said that democracy "depends on internal and moral order," adding, "You'll control society through either internal religious control or guns and jails."

During a panel discussion at the Republican National Convention in 2016, Sessions suggested that Supreme Court Justice Sonia Sotomayor and other judges might not be religious enough to be objective in their decision-making, saying, "If you have secularization in the world and don't believe in a higher being, maybe you don't believe there is any truth." Sessions was referencing a 2009 quote from Sotomayor in which she said, "There is no objective stance but only a series of perspectives."

At the Faith and Freedom Coalition's Road to Majority Conference, he added, "You see, this is a postmodern, relativistic, secular mindset and I believe it’s directly contrary to the founding of our republic."

Before the 2000 election, Americans United for Separation of Church and State sent a reminder to churches advising them that it was illegal for them to engage in politicking from the pulpit under IRS guidelines. After meeting with representatives from Pat Robertson's Christian Coalition, Sessions sent a letter to the Department of Justice (which he would lead as Attorney General) asking them to investigate whether AU had intimidated voters and saying that AU had tried to "disenfranchise religious voters by intimidating people of faith into not participating in the political process."

The Justice Department declined to pursue an investigation.

Other groups have summarized Senator Sessions' troublingly anti-LGBTQ record, including the Human Rights Campaign. Their summary (available here in full):